Traditionally the role of the men, where weddings are concerned, could be described as a little ‘back seat’. But I see that trend changing as more and more grooms take a more active role in the wedding planning; the men are rolling up their sleeves and getting more involved.

If you were cynical you’d say they’ve been allocated the ceremony by their fiancée but all I know is I’m being contacted by more grooms who take the lead role in the ceremony planning.

I try hard to include the groom at every turn and also to make sure he has every opportunity to have his say. Fourteen weeks before the wedding I send out questionnaires to both bride and groom. This is the information I use to write the first draft of the wedding script. Then over the following weeks the three of us work on the script until it’s perfect.

Again I’m finding more grooms are returning their questionnaires saying how much they enjoyed the process. As I usually have separate emails I can chat with the groom if I need more information about the bride or want to draw out his answers.

On the wedding day the groom definitely gets off lightly. The bride will have a hairdresser, a makeup artist and her bridesmaids to help her get ready – hours of preparation. I’ve arrived, an hour before the wedding and the groom has just got out of the pool!

Here the groom and his groomsmen are enjoying a toast to mark the end of an era and a new beginning. Cheers to marriage! 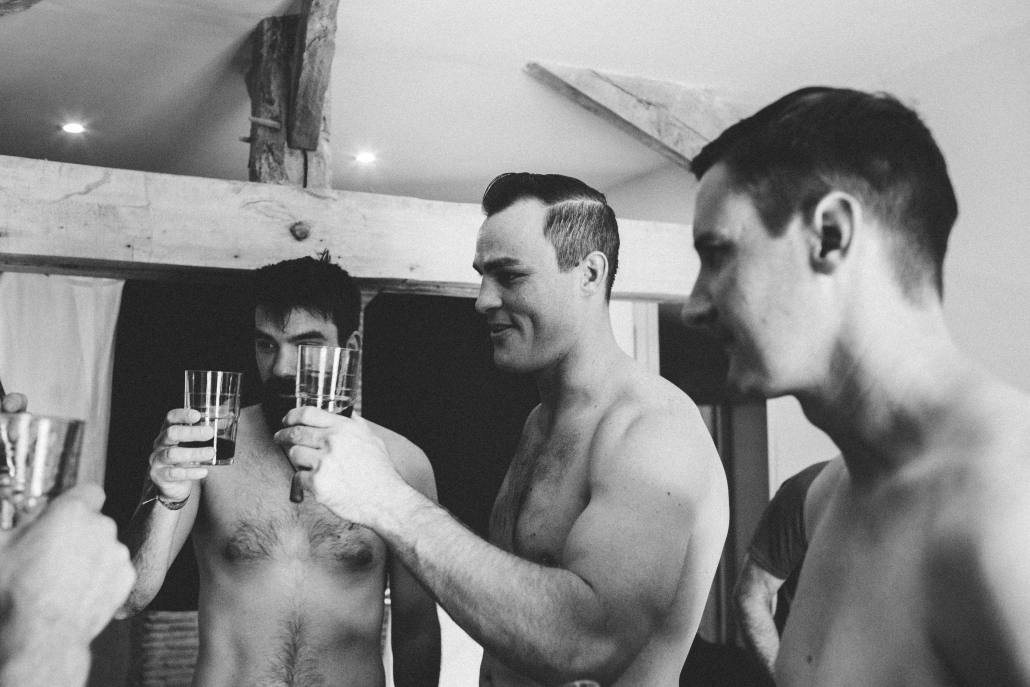 Then it’s time to get ready and with a little help from his groomsmen, he’s just about there.  But there are always those final touches to be added 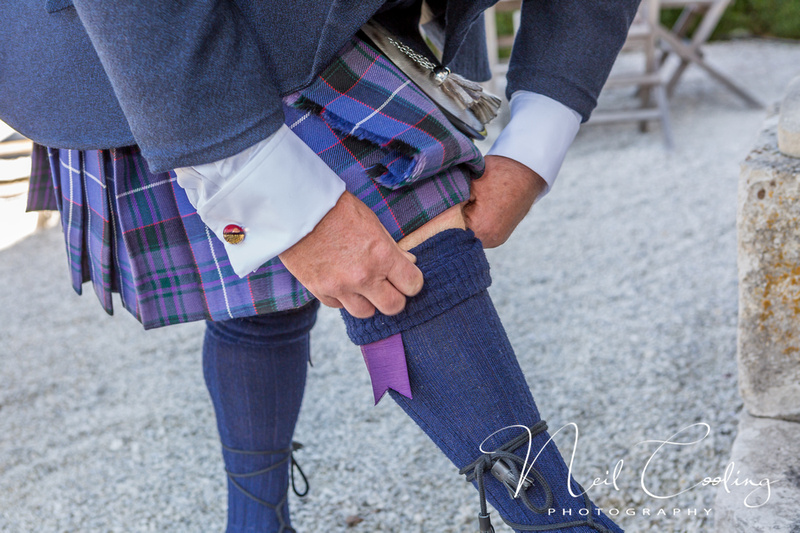 Whilst all that is going on, there are other males getting ready for their role in the wedding. The Best man is looking very handsome but has to make makes sure the all-important rings are in a safe place.

There could also be small people in the form of page boys but be careful………………………… they can steal the show!

Sometimes the men at the wedding fulfill a very traditional role. A father walking his bride down the aisle in an act of love and a time of great joy. 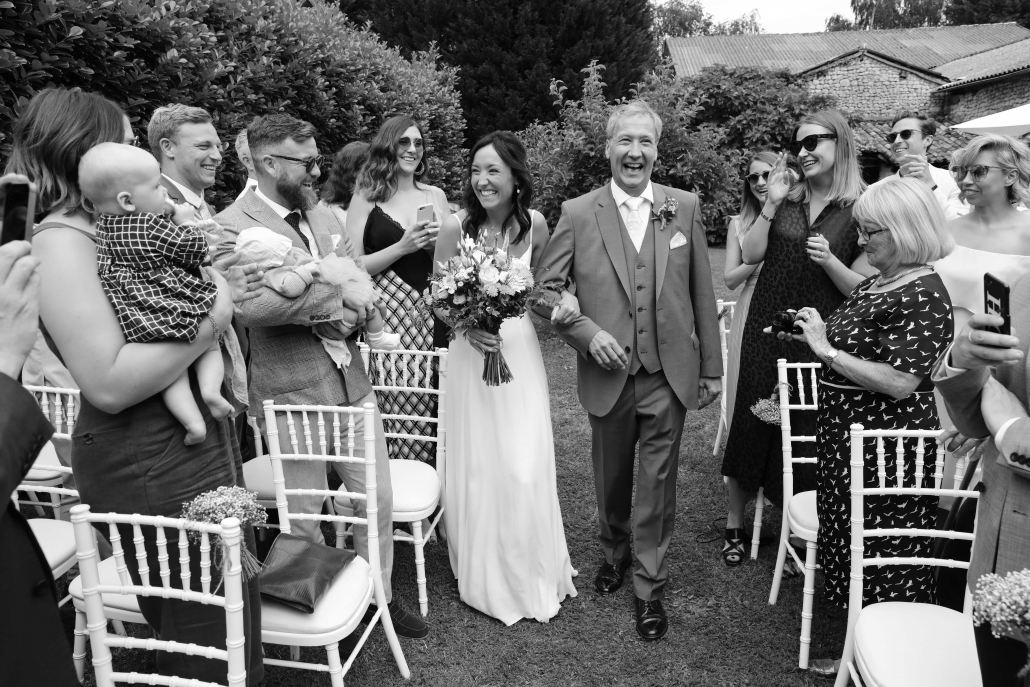 And then there are other men who take a less traditional role. This young man with equal amounts of pride and nervousness, walked his lovely mum down the aisle on her wedding day. 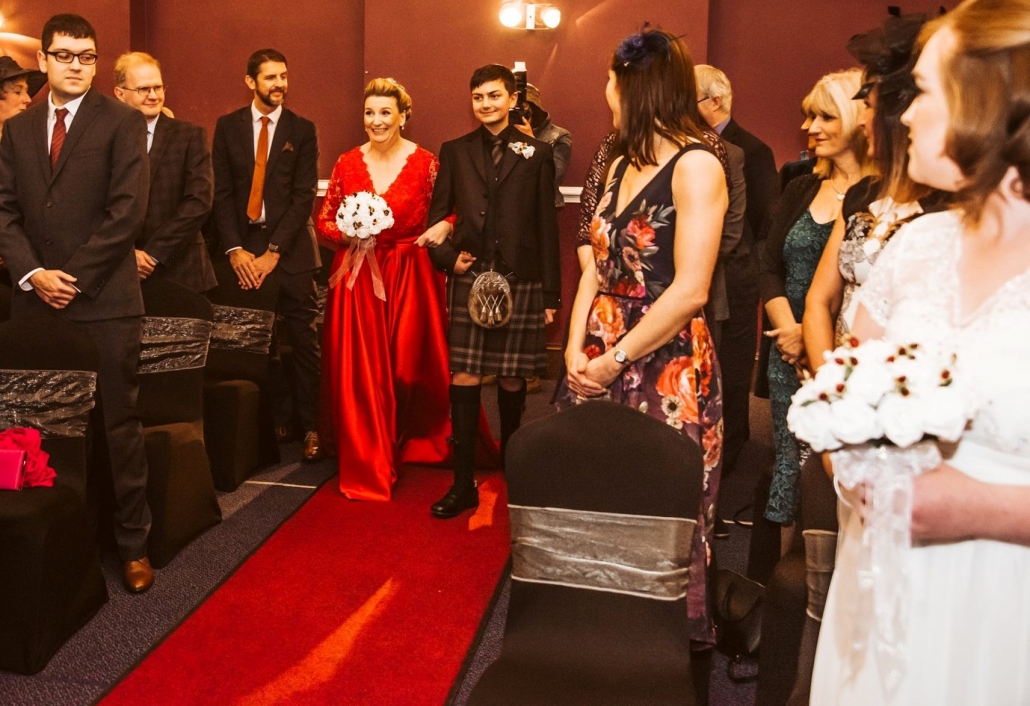 Photo by Babes in the Wood

And waiting at the other end of the aisle the groom took on a very meaningful role when he played as Sue and Robbie walked down the aisle. Not only that but it was a song he wrote especially for her! 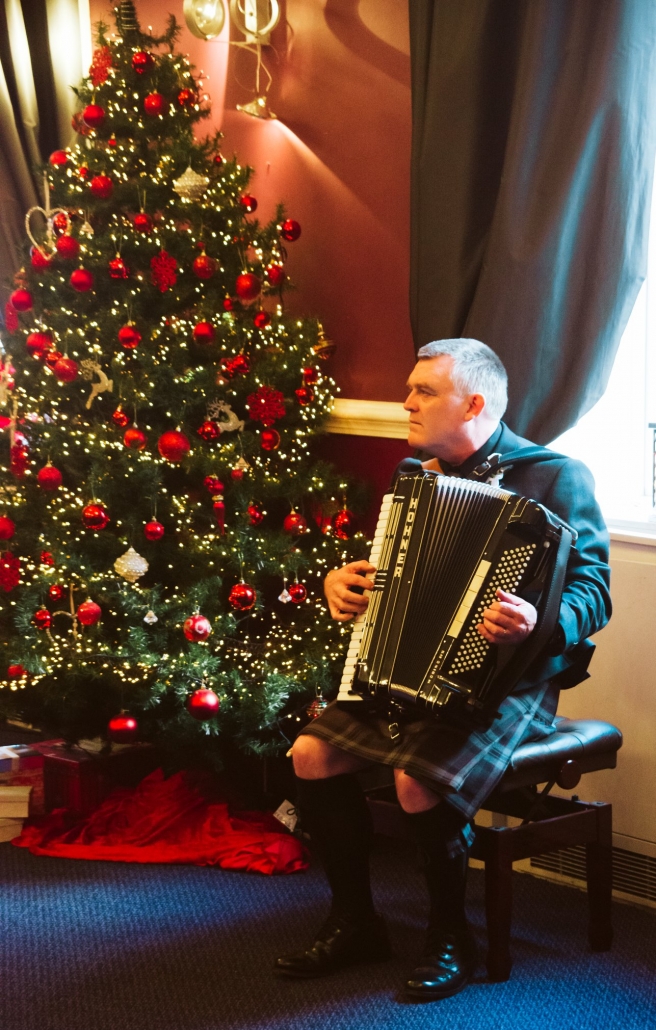 Photo by Babes in the Wood

In France the groom is often accompanied down the aisle by his mum but this groom decided he’d make an entrance in his own style.

It has to be said despite the best intentions, most brides are at least a little late. Now the role of the best man is to be there for the groom, helping in whatever way he can and keeping everything calm. Although from this photo all these guys look quite nervous! 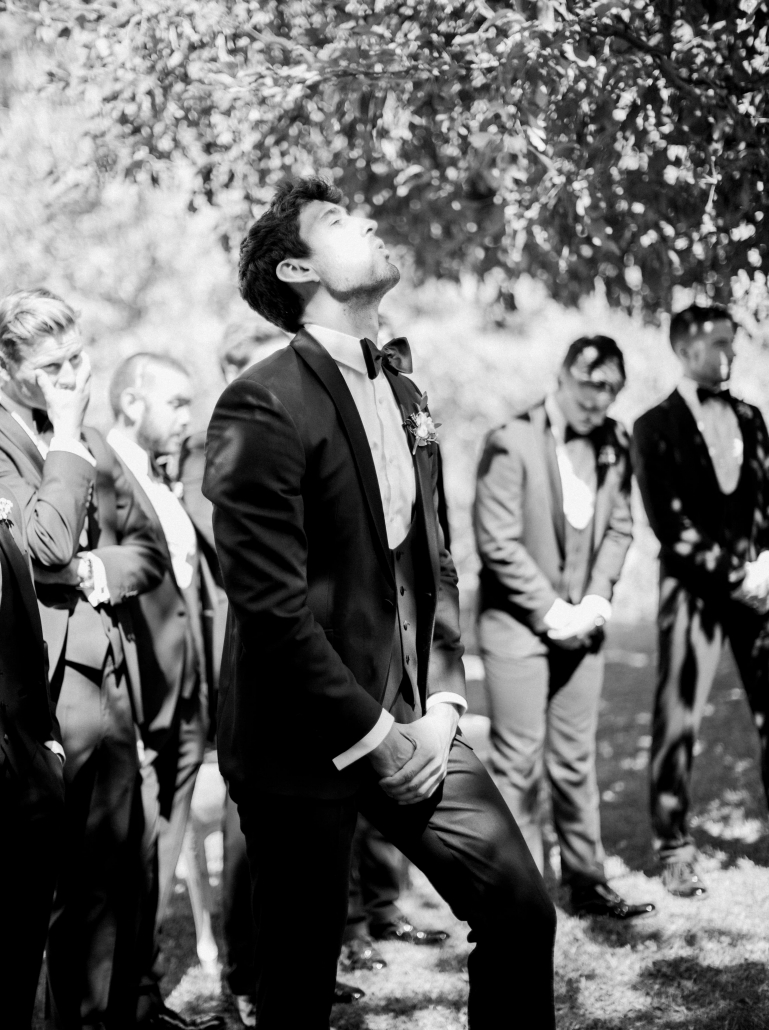 With their duties done for now, the groomsmen can sit and enjoy the ceremony, with a little laugh at the groom’s expense or maybe even a tear! 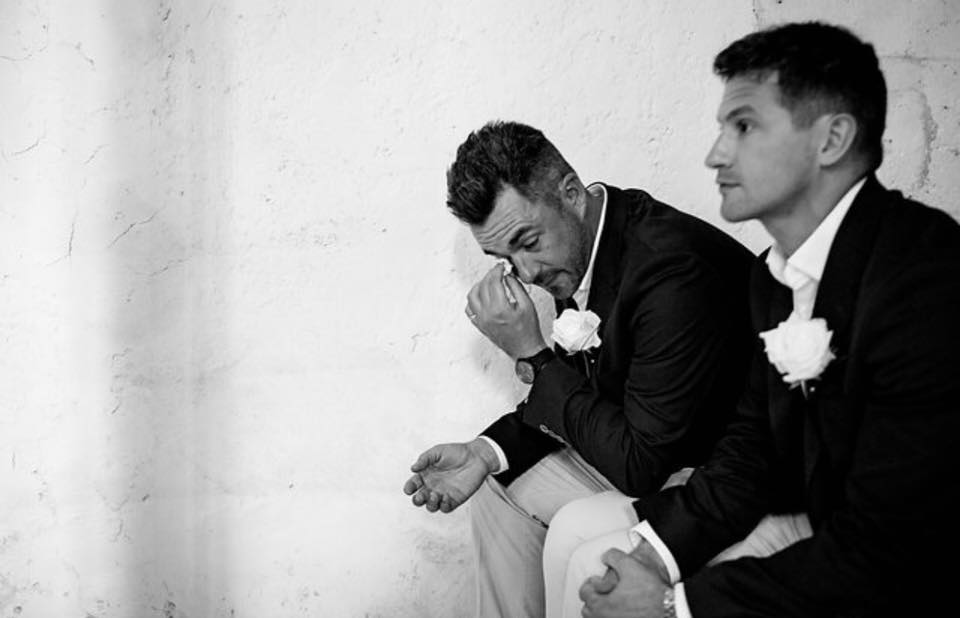 It’s always beautiful when others get involved in the ceremony,  whether it’s a nephew singing or a son reading a poem. Then, at just the right moment I call forward the best man. There’s a feigned look as he pats his pockets, looking for the supposedly lost rings, but then he miraculously finds them and presents them to the couple. 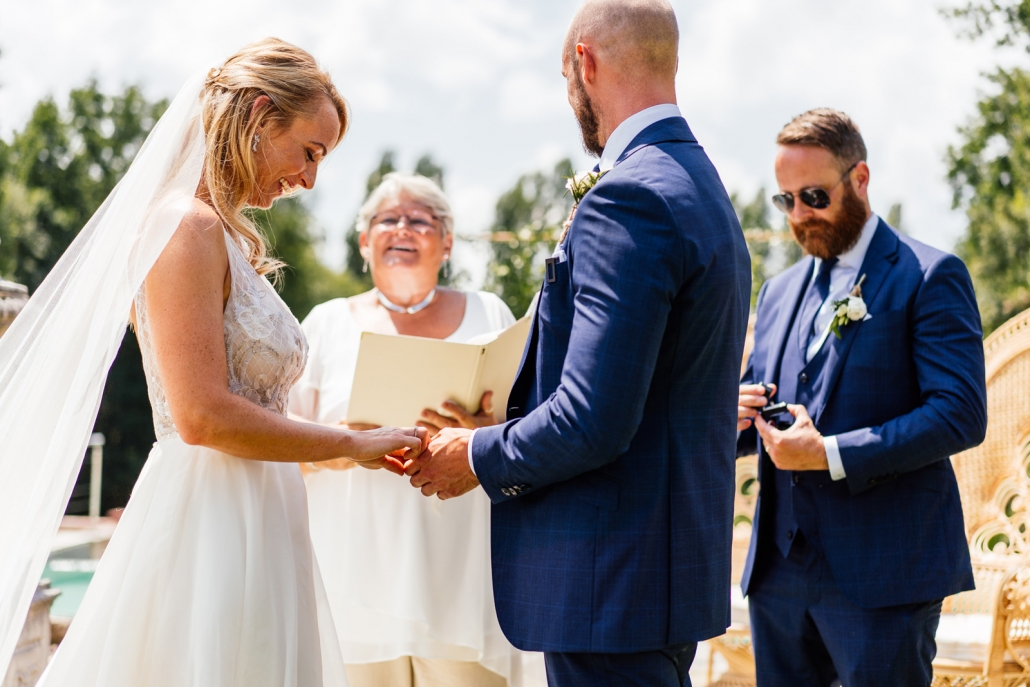 And before you know it, the ceremony is over and it’s time to leave accompanied by great cheering, clapping and smiles in a gentle shower of confetti. 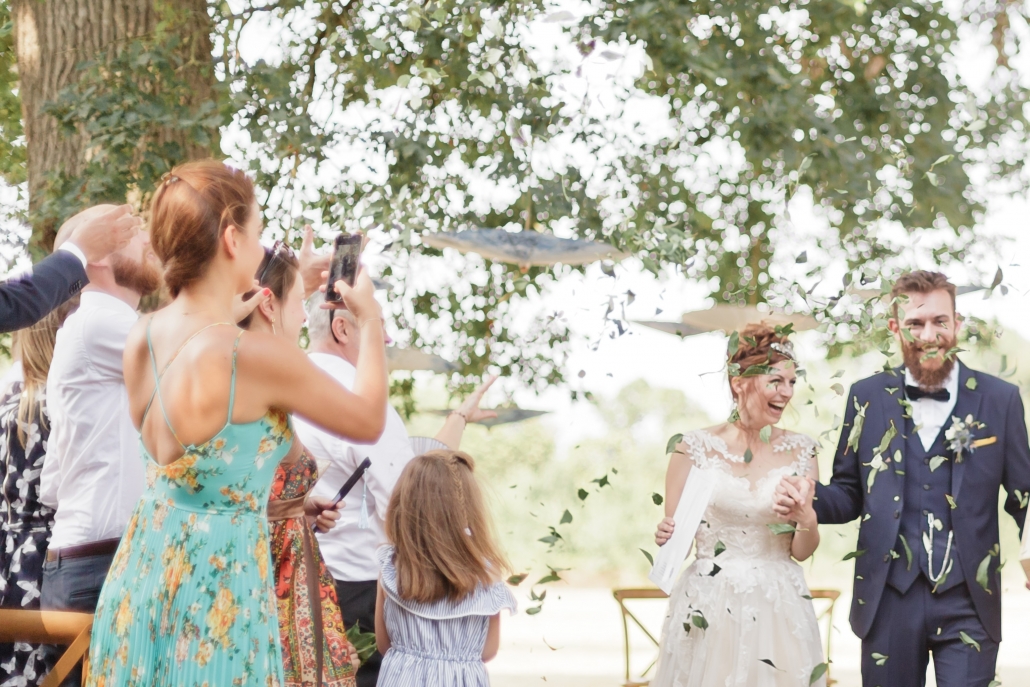 So that’s a whistle stop tour of the roles of men in a wedding ceremony. But, there are potentially so many more men who may be involved: the wedding planner or venue owner; the photographer; the caterers; the musicians; Master of Ceremonies; the men who put out and clear away chairs, tables etc.; the hairdresser and makeup artist; the celebrant; family and friends who help in every way they can.  All doing a great job.

When everyone knows what they have to do, the jobs get done, everything goes swimmingly well on the day and everyone is left with wonderful memories of a fantastic day.  So gentlemen, if you have a job but aren’t sure what it entails, take a few minutes to Google it; there are lots of articles you can read, or buy a book. Find out what’s expected of you and then you can manage or negotiate those expectations. The ladies have high standards and we won’t settle for anything less!

Writing your very own wedding vows ……

Does my wedding dress have to be white?
Scroll to top