Well the short answer is …… absolutely not. Some people think women have always worn white wedding dresses but in fact it’s a quite recent trend. You might be surprised to know that the popularity of a white wedding dress only really began in 1840. In fact it was 10th February 1840 when the young Queen Victoria married Prince Albert and appeared in a white silk satin dress, trimmed in Honiton lace, with an eighteen foot train.

Up until that time, a wedding was an opportunity to advertise the family’s social standing and wealth. So affluent families made sure their daughters’ wedding dresses had rich colours, exclusive fabrics and luxurious furs. For most people though, a wedding was a time to wear their best Sunday dress with the addition of a bouquet of flowers.

Traditionally, British royal weddings had been small, private ceremonies held late at night, but Victoria’s popularity was waning and she was advised that the wedding was an opportunity to win over the British people. In a great example of royal pageantry she road in a procession of carriages from Buckingham Palace to the Chapel Royal in Saint James’s Palace and the British people lined the streets to cheer their queen. To allow her loyal subjects to see her more easily, Victoria decided not to wear the traditional, deep crimson, velvet royal outfit but a striking white wedding dress. She wanted it to be unique and it was rumoured that the pattern for the lace was destroyed after the wedding so it couldn’t be copied.

In countries throughout the world various colours had been traditional for a wedding dress. For example, in Scandinavia black was a very popular colour and in China wedding dresses were red. However, illustrations were widely published of Victoria’s dress and everyone was talking about it. So it wasn’t long before the trend for white wedding dresses spread far and wide. Although it has to be said that the symbolism behind the colour white was hijacked and suddenly words like purity and virginity were banded around; nothing at all to do with Victoria’s reasoning of being visible in a large crowd!

Today there are many cultures who have traditional wedding costumes in a variety of colours; Chinese brides often opt for the traditional red. Although more modern brides are still choosing white. Interesting for me, in the last year I have had three brides who choose not to wear a white wedding dress.

In a complete departure from tradition, on several levels, Sue wore a stunning red dress had her son walk her down the aisle and her two daughters as bridesmaids! 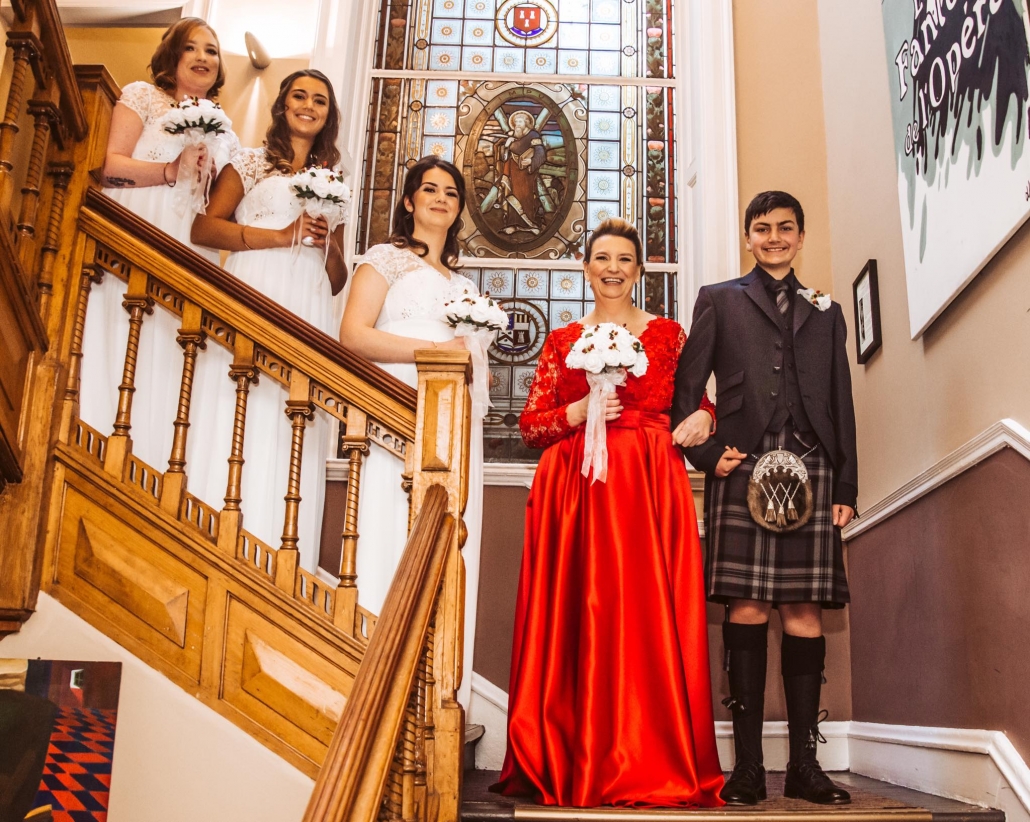 Thanks Sue and family: photographer Babes in the Wood Media

Whereas Vineta who got married in April, wanted fresh spring colours. Like Sue she opted for a white/ivory colour for bridesmaids’ dresses as a contrast to her dress. 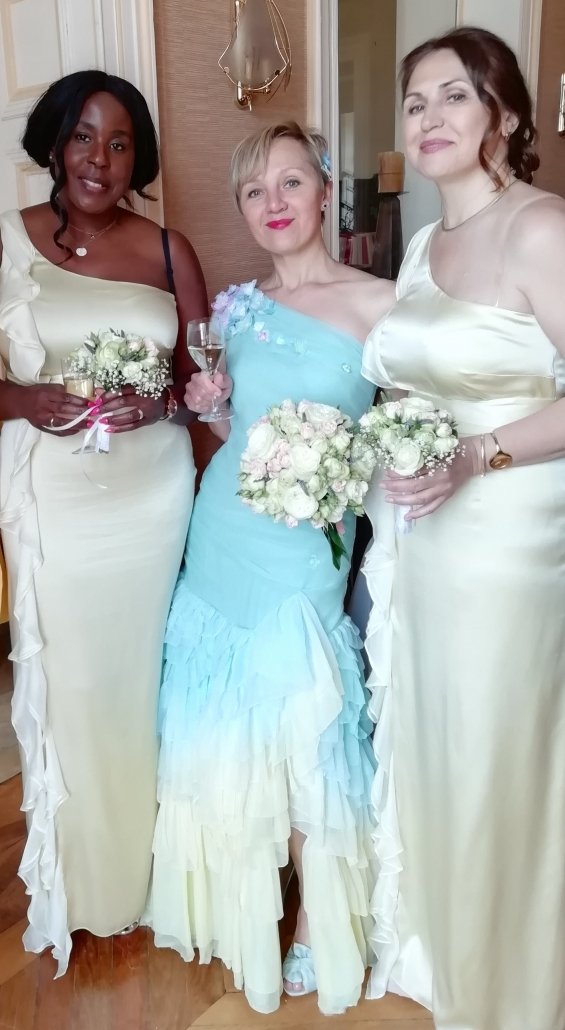 And then in the heat of a French summer Hattie and Michael had a boho chic wedding. And being very unconventional in oh so many ways, Hattie choose this wedding dress, which matches her personality perfectly. 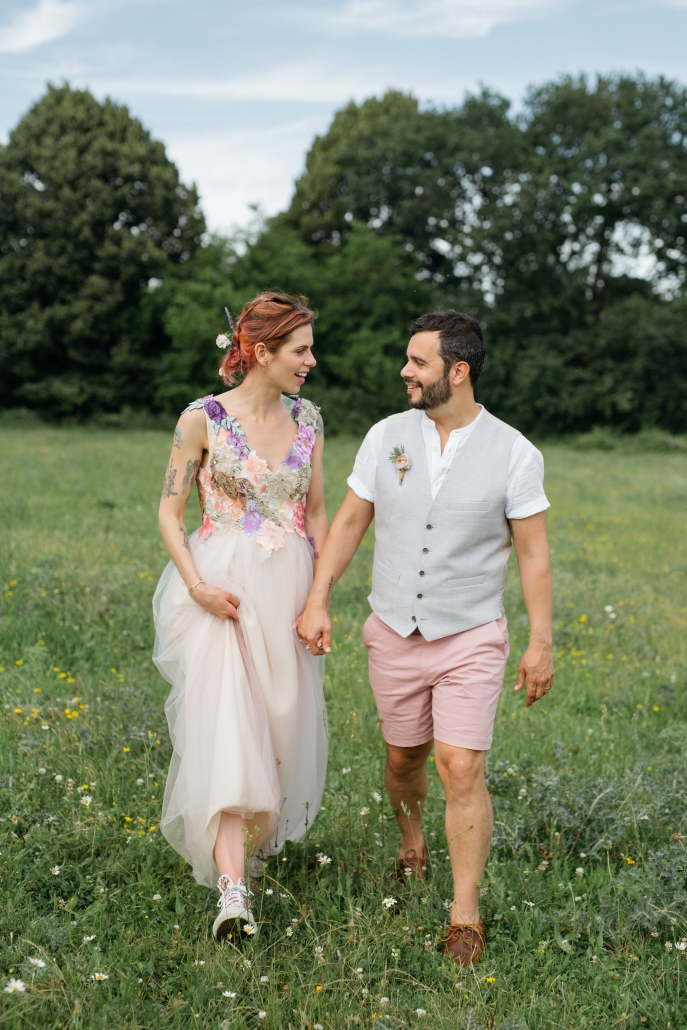 So in answer to the initial question ‘do I have to wear white?’ it’s a definite ‘only if you want to’. When looking for a wedding dress here are tips for a flawless wedding dress experience. But at the end of the day I think you should find one that makes you feel like a million dollars (or in our case Euros). The joy and love bubbling away inside every bride makes her beautiful.

And one last thought – Queen Victoria loved her dress and especially veil, so much so that she wore it again and again. In this photo taken to celebrate her Diamond Jubilee in 1897 she’s once again wearing her wedding veil and lace. So if you’re planning on keeping your dress for prosperity why not find, or create, opportunities to wear it again and again; maybe invite your girl friends over for a meal and you all wear your wedding dress!

Whatever colour of dress you choose I hope you feel amazing in it because you will look fantastic!

So, when’s the wedding?
Scroll to top